Some of my favorite recipes! Basically, some really simple things that I make and eat as often as some people drink water. I’m the kind of person who will eat the same thing over and over and over for as long as possible until I absolutely get sick of it.

I have already made this for a few friends and they have all loved it, with the exception of Josh, who is weird and doesn’t like sweet chicken sausage.

I am someone who used to HATE sweet potatoes. I couldn’t stand them, I didn’t like them, I didn’t want to see them, smell them, anything. GROSS. That is, until I went on Paleo in early 2012 and discovered that without all the marshmallows, cinnamon and butter, that they are actually REALLY good.
My hash is just diced up sweet potatoes, cooked on low heat with some olive oil, sliced up chicken sausage, and red pepper flakes, covered for about 20 min. Stir occasionally. Sooo good. I make a bunch at a time a reheat it whenever I want some, and I must mention that I am not one to eat leftovers.

Take 3 or 4 sweet potatoes, peel them, and then cut/dice them into smallish cubes.

In a LARGE frying pan, preferably one that has a lid, pour a bit of olive oil so that it coats the bottom of the pan. Dump in the sweet potatoes, stir up a little so the olive oil coats the contents, cover and cook on a medium to low setting (I do medium to low, because we have a super powerful gas stove that gets ridiculously hot). AND you’re not supposed to cook on high heat with olive oil, yada yada yada.

While the sweet potatoes are starting to simmer and cook, take a package of chicken sausage, I prefer Al Fresco’s Apple Maple Chicken Sausage and slice the sausage up into thin pieces. Al Fresco’s sausage is AWESOME because it tastes really freaking good. It’s pre-cooked so you don’t have to worry about it not being cooked all the way through, and it doesn’t have any of the garbage that you’d find in regular icky sausage.

SO yes… take your sliced up little pieces of chicken sausage and toss it in with your sweet potatoes. Stir it all up a little, and then cover. I usually let this cook (stirring occasionally) for about 15-20 minutes or until the sweet potatoes are nice and soft. I’ll do other stuff like, peel more sweet potatoes for the next batch, watch TV, play Words with Friends, etc.

I also like to add in some red pepper flakes too for an extra kick.

Once it’s done, serve yourself a big heaping portion of it, and leave the rest on the stove. Once you’re finished enjoying your meal, then you can put the rest in a storage container and stick it in the fridge for later. When I re-heat it, I’ll just scoop out a serving’s worth (my servings are probably like, 2-3 times the size that they should be, whoops) and microwave it for 2 1/2 minutes.

It gets better every time. Especially with some yummy sea salt too!!

(and yes, it really has the consistency of smooth ice cream!!)

I didn’t take “in the process” photos, because I didn’t imagine it would turn out very good. That’s how confident I was about this experiment..

Here it is, freshly processed in the little compartment thing of my giant enormous food processor.
It was at this point where I thought, hm.. it LOOKS good… I wonder if it tastes good???

And the final result. Scooped into my bowl, and ready to eat. I had already taken a bite by this point.. because if it tasted shitty, I wouldn’t have bothered with posting about it. 😀

This was DEFINITELY worth waiting for my overly ripe bananas (that I would’ve thrown away otherwise) to freeze!

THIS stuff… now.. THIS stuff was amazing. This was the “hey let’s experiment with the food that’s gonna expire if we don’t cook it like yesterday” recipe. Sounds gross, but.. it happens.

I had a package of uncured, nitrate, nitrite free whatever bacon by Oscar Mayer that had expired about a week ago, but after some responsible Googling, discovered it was most likely still safe to eat.

I then found a package of fresh chicken breasts from the Fresh Market, which needed to be cooked today or else it probably wouldn’t have gone another day.

I was going to try some mozzarella on top, but that wouldn’t have made it very Paleo..

Now that you have that information that was almost completely unnecessary, let’s begin!

Make sure you bake the sweet potatoes first, cause they’ll need to be mashed up for this. I didn’t want to wait 7 days for my sweet potatoes to bake, so I Googled a sweet potato microwave recipe. Voila! Wash them, poke some holes in them, and then microwave them both (simultaneously) for 7 minutes and 30 seconds. If you remember, turn them over halfway through.

Okay, while those are losing all of their nutrients in the microwave, prepare your chicken. I cut my chicken breasts in half, and then cut each half into halves.. (like, filleted them to make them thinner) I ended up having a thicker piece, so I sliced that one up again (in case you start counting in the picture.)

Once those are sliced up, go ahead and take 2 slices of bacon per chicken piece, and wrap up the chicken piece entirely with bacon. Just spiral it around. Go ahead, use your hands, get gross! I laid them all onto a nonstick cookie sheet, but you might wanna spray yours if it’s not a non-stick pan.

By now, hopefully your sweet potatoes haven’t exploded in the microwave. Go ahead and scoop out all the yummy sweet potato goodness into a bowl. Then add your butter and stevia and stir it all up.

Once your sweet potato mixture is mashed and stirred, put a spoonful of the mixture on top of each chicken/bacon piece and smooth it all over so each chicken piece is evenly coated on the top.

Stick your cookie sheet in the oven and bake for about 25-30 minutes. I took mine out at 30 min and the chicken was PERFECT. I even got Dave’s approval on this one, with a “Oh yeah fuck yeah” comment as he finished his piece of chicken. Success!

Please note the perfectly cooked piece of chicken right there in the middle. Yes… perfectly cooked! That’s the one Dave and I devoured. Sorry, I don’t care too much about presentation, as long as it tastes good and there’s lots of it! 🙂

I decided to attempt some paleo pancakes tonight after seeing a post by Ashley Horner about them. I went to try her recipe but got turned off at the whole ‘egg whites’ thing. We use entire eggs in this house! And besides, I hate separating eggs; the yolk is the best part! Alright so.. here were my ingredients:

Microwave sweet potato for 5 min, turning it halfway through, if you remember.  While that’s happening, gather up your other ingredients and mash your half banana. I stuck my other half in the freezer to go towards some paleo-ish ice cream another day. 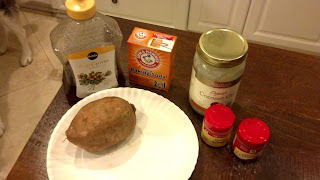 Scoop out the contents of your sweet potato and discard the peels. Using a fork, blend/whisk everything together, including your eggs, a dash of ginger, a sprinkling of cinnamon and a pinch of baking soda. For the salt, a couple turns on the grinder works just fine. 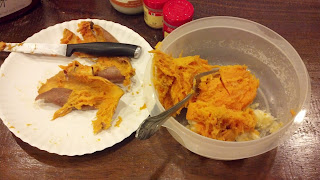 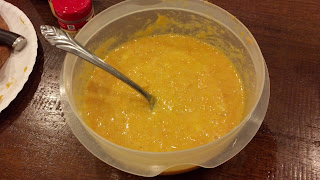 Once blended, heat up your pan on low-medium heat and put in a spoonful of coconut oil. Use a measuring cup as a ladle, and scoop up the mixture and pour it into the pan. 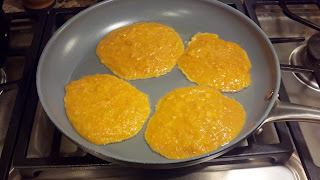 Now I am terrible at keeping pancakes together. This also goes for omelets, hash browns, whatever requires needing to be ‘flat’ in the pan without breaking. Fortunately, these were good no matter how bad they looked.

I also get really impatient..

So yeah, after awhile, if you’re good at making pancakes and all, go ahead and flip them and keep checking to make sure they’re not burning. 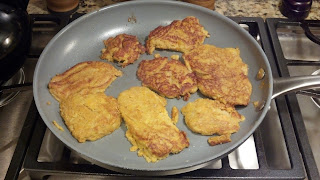 My 4 beautiful sweet potato pancakes turned into 8 or so smaller, botched up ones, but that’s cool.

When you’re pretty confident that they’re done, and you know the eggs have been frying long enough that you won’t get some weird disease, go ahead and remove them from the pan and onto your plate. I tried to dress mine up with some honey and cinnamon, but regardless of how weird they looked, they tasted awesome. Dave even almost liked them! (and he’s not one for paleo OR bananas..) 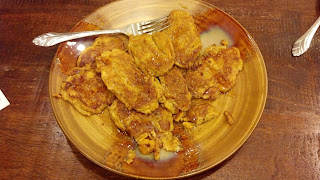 VOILA. Took me 25 min from start to finish, including trying to figure out if I had all the correct ingredients.

You’ll need:
1lb of Ground Turkey
1 package of whole white mushrooms
1/2 sweet onion
red pepper flakes
olive oil
parmesan or romano cheese for grating
Preheat oven to 350.After washing the mushrooms, remove the stems from the mushroom caps, and then finely chop the stems along with your 1/2 onion.

In a pan with a little olive oil, start browning your ground turkey, and once chopped, add in your onion and mushroom stems. Once everything is browned nicely, placed your uncooked mushroom caps on a greased cookie sheet, and overstuff them with the mixture from the pan. Sprinkle with grated parmesan or whatever, and then bake for 15-20 min in the oven. I like to have some of the mixture spill over onto the cookie sheet too so there’s more food to eat. OR you can eat the rest of the browned turkey mixture goodness right out of the pan, or save for another meal. (like sweet potato hash!)