You are here:
April 22, 2013Leave a commentWODsBy alicia

So.. I don’t want my only memories posted of the RAID games to be the negative. In all reality, I had a blast. There was just a small portion of it that truly pissed me off, which is outlined quite thoroughly in my last post, and I really don’t even want to talk about it anymore. It’s out, what’s done is done. MOVE THE HELL ON.

When I think about my experience, as a whole, I had a great time. I got to spend it with great people, meet some incredible people I didn’t expect to meet, walk around and see all kinds of cool shit I never would’ve seen otherwise, and still get a hell of a workout. It was all in all, everything I expected it to be and way more.

First of all, the coolest part about Crossfit is the community. This weekend was no different, in that the Crossfit Community was definitely present and alive at the raid games! I saw lots of familiar faces, which happens more and more, the longer you’re a part of CF, and I even got to meet some cool new people, too! My two favorites were Heidi and Jamie, from Crossfit Estero. They were like, our soul sisters! Haha Lauren and I had driven down on Friday and stuck together most of the time. Jacob was with us too, so it was just the 3 of us from CFTC. Lauren and I met Jamie almost right away when we had to get in groups based on division. So basically, right from the beginning we hit it off. Thankfully! If you’ve ever been to a Crossfit competition, you’ll know that it can be pretty intimidating if you don’t know anyone there.

Jacob kept to himself cause he’s a boy and that’s what they do. Most of the time I think he was sleeping in a vacant or abandoned trade show booth or something. We’re not really sure. So.. the 4 of us girls do what we do best, and we took lots of pictures of ourselves 😀

I swear, Jamie (blue shirt) is my long lost soul sister! Except.. you know how usually when you meet someone who’s a lot like you, they annoy the shit out of you? That didn’t happen. And she was just like me! It was pretty badass. We’re BFFFFF now. Heidi (far right) just kept everyone laughing no matter how inappropriate she was, and Lauren (left) made sure we all had enough free protein bar samples to eat, as we constantly frequented the vendors and cruised the aisles for free samples.

I also got to meet Annie Thorisdottir! If you don’t know who she is, then you definitely aren’t a CFer. She won the 2011 and 2012 Crossfit Games! Literally, the fittest woman on earth.

Which brings me to the next amazing girls I got to hang with. Streaky and BadKat! These two are sponsored athletes of Lift Big Eat Big which is a site that I follow. Russell, my awesome coach, suggested I check out the site awhile back because it’s more about being strong and lifting heavy shit, and eating to support your sport, and not focused on being skinny and thin.  The girls on here are real girls, ones I could relate to more than say Julie Foucher or Camille (as awesome as they are, I will never look like them or be that small!)

I had the honor of meeting Streaky at Wodapalooza, and we’ve stayed in touch since, but Kat’s from Canada, so running into her isn’t so likely! Was seriously awesome to spend time with both of them and watch them compete and destroy the RX division.

Streaky will be up here next weekend for the LBEB Strongman Seminar, so just some more quality time with her lifting heavy shit. It was pretty amusing watching people come up to them from all over, asking for their picture. I know them from facebook (I know, that’s like BFF status!) but to see them deal with their fans IRL was pretty awesome. They totally have a following!!

And last but not least, our awesome team of 3. 🙂 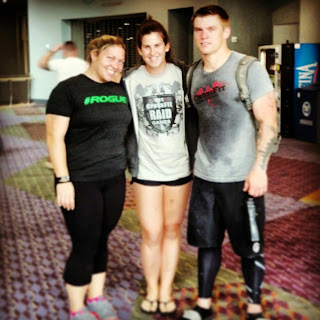 Now that we’re all home safe, and recovering from being hit by our respective invisible trucks, we can move on with our regular Crossfit activities. 😀 I’ll see you at 7a, WOD!