You are here:
July 24, 2013Leave a commentWODsBy alicia

So… we were headed to Vero Beach for the weekend to see Dave’s family and to partake in a surprise birthday for his brother. I was running errands before we left, and decided to call the Ale House one more time to see if anyone had turned it in. They had me on hold for so long, I finally hung up, and as I did, I noticed it was 11:11 on my phone..

The night before, I had seen 11:11 three different times, and thought, wow… what are the odds? I haven’t seen this in awhile?

So.. I called back, and the girl confirmed that No, sorry, nobody had turned it in. 🙁

I decided to call YogaBerry again and ask, just in case. The girl who answered said “well, we have lots of rings here… what does yours look like?”

I described it in detail, from the white gold/rhodium plating on the underside wearing away to the 3 stones on top.. and she said quietly.. “I think we have your ring here..”

I made a quick U-turn and headed to YoBe. I was there within 2 minutes and kinda went running in. She looked at me and knew who I was by how I was acting, apparently, and reached into the drawer and held it up. She asked “is this your ring..?”

I took one look at it and burst into tears. I couldn’t even move. I just stood there crying with my hands covering my face. The other patrons must’ve been like, what the hell..? Why is she crying??

Awesome YoBe girl then said “Noo!! Don’t cry!! You’re gonna make me cry!!!” and then the whole place was emotional! Hah All  could do was stand there and cry with my face covered.  I had found my ring!  She handed it to me and I immediately put it on my finger. I couldn’t even believe I had it back! All the anguish and stress and pain and guilt I had been feeling, all came down on me right then, all at once. I had my ring back.

I gave her a hug over the counter and she explained that an older lady had found it outside under the table (where Dave and I must’ve been sitting) and had turned it in. I have no idea exactly what day, but really? It was just sitting outside, under the table?? Wow… Unbelievable. What if I had looked there on that Saturday when we were at First Watch? Why didn’t I?

I don’t know.. lesson learned. That ring is not to be worn. Something so special and sacred to me as that, something so irreplaceable.. needs to be kept safe.

I went to my jewelers yesterday (Monday the 22nd) and dropped it off to have it cleaned, polished, re-plated and re-sized. When I bought that ring, I had it made in an 8.5.  Yesterday Bill measured my ring finger and determined it was a size 7 now.

Here are some shots I took of it.

This one’s under this ASET tool thing. http://www.americangemsociety.org/aset-reg-tools

Keep in mind, the hole I had to look through was about the diameter of a drinking straw, if not less.. It took a steady hand to get my phone to take this shot. 🙂

And this is my ring to the right of a new little ring I found on ebay. I’m having it resized to fit my finger. It’s not perfect, but I think it’s really pretty and really cute! 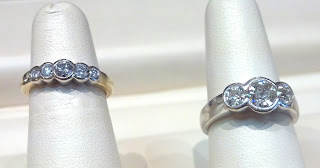