You are here:
May 8, 2012Leave a commentWODsBy alicia

Today we tackled Kelly… I’ve never done Kelly before, but man… that was pretty intense! So.. Kelly is the following:

I got through 3 rounds exactly. I had about 15 seconds left over when I finished my wall balls, but there was no chance in hell I was gonna go run 100 feet and then come back in, so I collapsed early. If that sounds lazy, I’m sorry! Not meant to be that way.  This was one of the harder workouts that I’ve done.. one of those ones where you feel like you’re going to throw up, you’re really really red and hot and you can feel it, and your heart is pumping wildly fast.  As I was laying on the ground, trying to catch my breath, I checked my pulse and it was at 150 bpm, hah. I normally have a pretty high resting heart rate of 90ish or so, so I suppose 150 really isn’t that high, but MAN we were all burning up and red-faced at the end of this one!

After our cool down stretches, which ended in some figure 4s on our backs, Scott (coach!) said alright guys, you’re all finished! And nobody moved. That doesn’t happen very often, but once we realized that nobody was moving, we all started laughing. 😀 Good times! I love Crossfit! 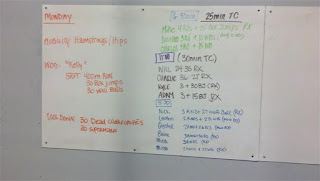