You are here:
September 4, 2013Leave a commentWODsBy alicia

First WOD of September.. been busy as shit at the office, and then had a jetsetting trip to Wisconsin to see the fam Saturday-Monday, so didn’t have much of a chance to work out. I contacted my Mommy’s old Crossfit Gym to see if I could at least get a Labor Day WOD in, but they were closed for the holiday. 🙁

So.. I got home late last night/early this morning from Milwaukee, and ended up spending the day at the office moving everything around. Holy pallet racking, boxes, vinyl, tables, machines, etc.

Here’s kind of what we ended up with, although this only shows a portion of this particular warehouse space.

My hands, back, shoulders and feet were sore from moving all this shit around, but I still wanted to go to the gym. After almost a week of not working out (again!) I was determined to go in and do something!

When I got there, I got my 400m warm up run in, and today was back squat day. I’m really not into this whole cycle, so I just did some squats at the beginning percentages, and was like, screw this. I don’t want to do this..I’m just going to hurt myself.

I ended up lowering the weight down to 95lbs and just did sets of 10 back squats, and 10 front squats. I put the weights away and wandered around for a while. I didn’t want to destroy myself and not be able to come back for a few days.

I was determined to RX this one. I saw the other scores at around 10-11 min and figured if I DID Rx it, I’d take a little longer, but at the risk of ripping my hands. I wanted to give it a shot anyway.

I started in on the WOD and surprisingly, got almost every single T2B, which was really motivating, because it kept me going with the movement. I had gotten so far and was almost done with the WOD that was determined to stick with the T2B, and I did! I got through my burpees and was on my set of 9 T2B when my hands ripped. Searing pain set in after I realized what had happened and I cried out in pain and frustration. I did my last set of 2 burpees and walked up to Justin.. I couldn’t keep going with ripped palms. BOTH palms were ripped (I didn’t know they were both ripped just yet!) I showed him my hands along with a pouty, frustrated face, and he asked me if I was done. I nodded, all pissed off, and he asked me if I was sure, as he began to write DNF next to my name.. (along with RX).

I nodded again, knowing that I didn’t want to further destroy my hands and worsen the tearing, and as I saw him write DNF on the board.. I couldn’t help but feel the tears emerge in my eyes.

I had worked so hard for that RX today. To get through my set of 9 and choose not to finish my last rep count of 10 was REALLY frustrating and defeating for me. I turned and walked out of the gym, knowing I wasn’t going to be able to hold back my tears. Justin ran out after me and crouched next to me as I leaned on the glass doors with my head in my hands, just fucking crying.

I felt like such a failure. How is it that I’m RXing a WOD, and I’m STILL NOT GOOD ENOUGH? All I could think about was not being good enough. Never good enough. I suck. I can’t even finish a fucking burpee and T2B workout. What. The. Fuck.

And I couldn’t stop crying. 🙁 I just stayed crouched down and kept crying. It’s a miserable feeling. He tried cheering me up and fist bumped and all that, telling me my toes to bar looked good, I’ve come a long way, etc, but it didn’t erase the fact that I DNFed. He left and then Russ came out to talk to me as well.  I don’t know how these people do it.. he knew what to say and how to say it. I left feeling better, but still.. fucking DNF. and my hands hurt! Both my palms each have a giant raw hole in them.
I felt like Ricky Bobby for the remainder of the evening.. I didn’t know what to do with my hands and just held them up. 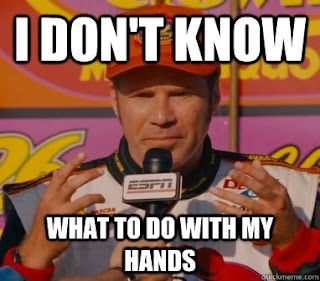 Ah well. It is what it is. At least I did a shit ton of T2B and RXed those motherfuckers.